The Gayatri Mantra: Its Origin, Meaning and Practice 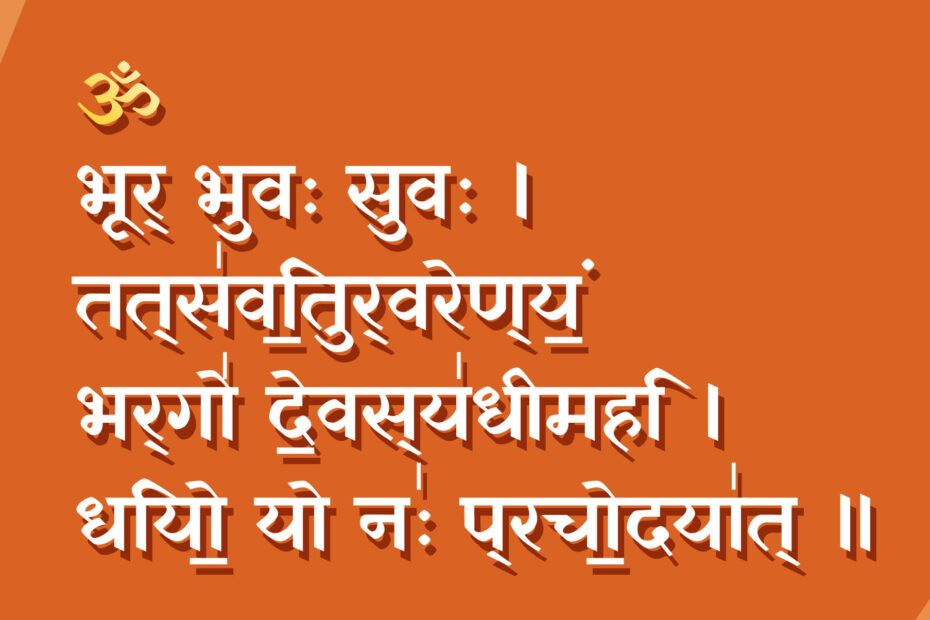 The Gayatri Mantra is composed of verses from the Yajur and Rig Veda and the prefix ‘om bhur bhuva svah’. It is usually chanted in a specific melody. It consists of four lines:

Om the Three Worlds (earth, ether and heaven; or physical, subtle and causal)

We revere the Pure Divine Being (Tat)

We meditate on the Divine Effulgence (symbolized by the sun deity, Savitr)

Who may enlighten our minds.

Meaning of the Gayatri Mantra

While the first two lines are in praise of the Divine Being, the third is a short meditation on the radiance of the Absolute Truth (symbolized by the Sun God, Savitr). The fourth line is a short prayer for enlightenment.

Due to its universal, non-denominational character and meaning, the Gayatri Mantra has a wide appeal to people of various denominations and even different religions. Being a very important mantra in traditional Hinduism, the Gayatri is also very popular with Western born Yogis. While orthodox Hindus restrict its use to initiated male, higher caste Hindus, many contemporary Indian spiritual teachers encourage the chanting of the Gayatri regardless of sex, caste or creed.

Practice of Chanting the Gayatri

The Gayatri Mantra is traditionally chanted three times or a multiple thereof. It is the main element of the ‘Sandhya Vandanam’, a religious Hindu practice performed at dawn, noon and dusk by male, upper caste Hindus initiated into the ‘sacred thread ceremony’.

Apart from this practice, the Gayatri Mantra can be used in many different ways. It can either be recited only a few times as a short prayer, as a blessing before meals or for mental purification while taking a shower. It can also be used for Mantra Japa and chanted 108 or more times, perhaps with the help of a Japamala.

Benefits of Chanting the Gayatri

The Gayatri Mantra is regarded as a highly powerful mantra. It has been called the mother of all mantras as well as the mother of the Vedas.

Its powers and merits are mentioned in various Indian scriptures, such as all the four Vedas, the Upanishads and the Bhagavad Gita. In Verse 10.35 of the Gita, Krishna even identifies himself with the Gayatri, saying “Among the meters, I am the Gayatri”.

The benefits ascribed to the Gayatri include protection from all sorts of harm, purification and enlightenment of the mind, courage, health and many other worldly and spiritual benefits.

How to Chant the Gayatri

As with all other mantras, the correct pronunciation is deemed just as important as the right feeling and concentration while chanting. There are different tunes for chanting the Gayatri. However, the proper rhythm and intonation should be observed.