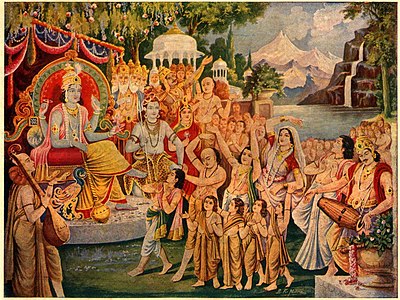 Kirtan is a spiritual practice coming from India. Literally translated as “celebrating, praising, glorifying”, Kirtan more specifically means the chanting of sacred sounds or Mantras. Kirtan is not about artistic achievement and perfection but rather about reaching a meditative or ecstatic state of mind. It regards Bhava (the feeling) as just as important as Raga (the tune).

The Practice of Kirtan

Kirtan is generally practiced as call-and-response – a lead singer chanting a line which then is repeated by the rest of the group. The songs as such are mostly relatively simply structured and repetitive, usually starting slowly and then building in pace and intensity. Kirtans are usually sung in groups, though they can also be practiced individually. Chanting in a group of people, however, is more common and tends to be a more intense experience.

Although there are also chanting traditions in other religions such as Buddhism, Christianity and Islam as well, Kirtan is clearly of Indian origin. It stems from the devotional tradition of Bhakti Yoga, the Yoga of Devotion. The spiritual practice of communal singing (Sankirtan) is central in Bhakti-Yoga and can be found in both Hinduism and Sikhism. Kirtan is a way of joyfully concentrating on the Divine through music. It could also be described as a kind of singing meditation.

Typical, well known Sanskrit Mantras used in Kirtans are for example “Om Namah Shivaya”, “Om Sri Ram, Jaya Ram, Jaya Jaya Ram” and the Hare-Krishna Mahamantra. There is a wide variety of other Mantras, most of them connected to the Divine Names (such as Rama, Krishna, Durga and Kali) or sacred verses from the holy scriptures of India.

Kirtan Artists in the West

In the last decade, Kirtan has become increasingly popular in the West, too. There are a considerable number of Western Kirtan Singers such as Krishna Das, Jai Uttal, Snatam Kaur, Deva Premal, Ragani, WAH! and Vaiyasaki Das, just to name a few. All of these artists have produced CDs besides giving live performances.

A Kirtan concert is very different from a conventional music concert. First of all, the listeners participate in the chanting of the Mantras which are sung in call-response, making the listeners an essential part of a concert. This communal aspect is central to Kirtan. The Mantras are mostly in Sanskrit, but many Western Kirtan Singers have also experimented with other Mantras besides the traditional Sanskrit ones. Some also sing in English. One individual song may last from three minutes up to an hour, yet five to 20 minutes may be the common average.

Being by definition a powerful combination of both art and spirituality, Kirtan may guide the listener/ participant either into calm meditation or a joyful ecstasy. That means, some visitors will be sitting quietly through the concert with their eyes closed while others may sing out loud, clap enthusiastically or even dance ecstatically.

Yoga of Kirtan. Conversations of the Sacred Art of Chanting. By Steven Rosen.

Kirtan!: Chanting As a Spiritual Path. By Linda Johnsen and Maggie Jacobus.