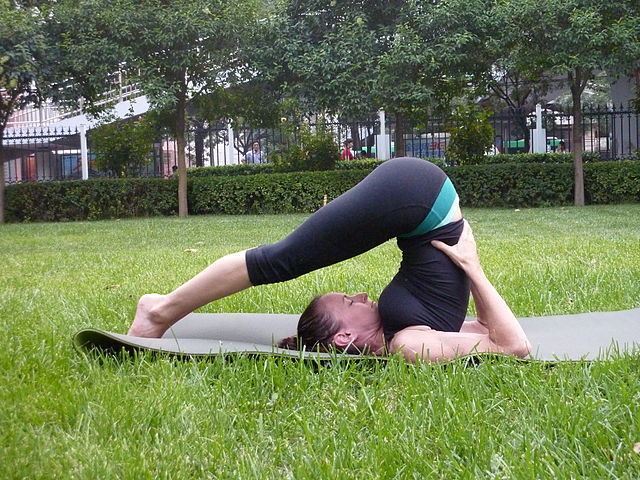 Relax, Restore, and Increase Flexibility in this Gentle Inversion

Halasana can be a very intense pose for some students. The primary concern in this pose is to keep the weight of the body off the cervical vertebrae (the back of the neck) by distributing the weight between the shoulders and the back of the head.

Approach the pose lying on the back with the knees bent. Arms are close to the body, palms down. Bring the legs over the head by pressing into the palms and elbows and utilizing the momentum of the movement to bring the hips directly over the shoulders. The feet may or may not come to the floor at this point.

Keep the chin away from the chest to maintain the curve of the cervical spine, pressing the head and shoulders into the mat. Work the shoulder blades closer together by sublty shifting the weight of the body from one shoulder to the other.

Clasp the hands behind the back and straighten the arms, bringing the hands onto the mat.

Continue to flatten the back, extending the tailbone skyward as the hips move over the shoulders, the shoulder blades move together and down the back, and the core muscles of the abdomen engage.

If the feet touch the mat behind the head, they may be flexed so that the heels are descending towards the mat, lengthening the back of the legs. The toes can also be pointed, increasing the stretch through the back and stretching the front of the ankles as well.

To come out of this pose, place the hands back on the mat, palms down and roll slowly down the spine. Remain in savasana for a few breaths to allow normal blood flow to return to the body and to avoid dizziness from a sudden change in orientation.

Benefits of The Plough Pose

Halasana is a relaxing and restorative pose that can alleviate the anxiety and depression associated with stress. The pose affects the thyroid and parathyroid glands associated with the fifth chakra (in the throat). These glands regulate the body’s metabolism and energy use; the relaxing effect of plough pose can calm symptoms of hyperactivity such as high blood pressure and an overactive and troubled mind.

The back side of the body is also our emotional side, our yin side. We carry much of our emotional tension in the back body. Relaxing in halasana for an extended period of time is a passive and effective way to relieve emotional stress and can have an euphoric after effect.

Because the heart is above the head in this pose, it is an inversion. Inversions calm the mind, tone the internal organs, and improve circulation throughout the body.

This pose releases the energies of chakras one, four, five, and six, which are associated with the reproductive organs, lungs and heart, larynx, and mind (or third eye) respectively.

Halasana has many variations that may be yin (passive poses) or yang (active poses). Here, we will discuss the passive variations that complement the restorative and relaxing effects of halasana.

Different Variations of The Plough Pose

In Yin Yoga, a variation of halasana is called the Snail Pose. In this pose, the hands are kept wider than the body with palms down. The back is rounded and the legs hang tensionless. As in all yin poses, the student is encouraged to relax the body completely over its frame and turn all awareness to the breath.

Another passive variation of plough is Karnapidasana or knees to ear pose. A pose suited for more flexible students, the back must be flexible enough to keep pressure off the neck. In this variation, the legs are bent with the knees around the sides of the head and the arms wrapped around the back of the thighs. It can be difficult to breathe in this pose for some students. Patient and slow breaths will eventually allow one to find the space to breathe.

Also called the Easy Shoulderstand or Inverted Lake, this pose is approached from plough, but eliminates the flexibility and core strength necessary for traditional plough pose. After the weight of the legs is shifted past the shoulders in the approach to plough, the hands are brought onto the sacrum, fingers pointing towards the buttocks, elbows shoulder-width apart on the mat. The pelvis rolls out and back so that the back straightens and the weight of the body is evenly distributed between the hands and shoulders.

This pose relaxes the fifth chakra, thereby slowing the metabolism. It also balances the fourth chakra’s energy, restoring the cardiovascular system, and stimulates the sixth chakra, bringing balance to the mind.